Three of the industries most recognised family businesses have collaborated on a post lockdown deal, that will drive safety standards, reduce risk and improve efficiency on site. 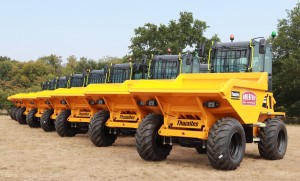 For over 55 years Suffolk based Breheny Civil Engineering Ltd has been building Britain’s Infrastructure. Ernest Doe, who began trading in 1898, have been supplying the construction sector since the late 1950’s. Whilst Thwaites began production from its Warwickshire base in 1937, some 83 years ago.

The deal for 15 x cabbed, 9-ton forward tip dumpers has been delivered in August 2020 and will be heading out to major infrastructure projects across the Breheny operating area.

Breheny Plant Operations Manager Andrew Dobrucki said “Thwaites dumpers have been an integral part of the Breheny plant fleet from the very early years on site. We are committed to achieving the highest possible standards, so much so, we invited Thwaites to provide demonstration models of their 9-ton cabbed dumper to our infrastructure project at Beaulieu Park, Chelmsford”.

“The dumpers were put through their paces over an extended trial period. The performance feedback from both the users and the site management team, showed a clear preference for the Thwaites 9-ton cabbed dumper, rather than its peers. Whilst this came at a cost premium, the robust build, safety characteristics and performance were considered to be compensatory factors in mitigating the premium”.

Ernest Doe Area Sales Manager Nigel Booley said “I was delighted to conclude this deal with Breheny. Firstly because it is a significant indicator of the confidence within the industry, post COVID-19, and secondly given the competitive landscape and interest in this opportunity”.

Thwaites Distributor Manager (South) Paul Rodwell said “Thwaites were pleased to support, Ernest Doe on this prestigious deal. Breheney have a clear behavioural safety initiative of, Think Safe, Work Safe and Home Safe which is congruous with that of Thwaites and the design features of the 6-ton and 9-ton range” 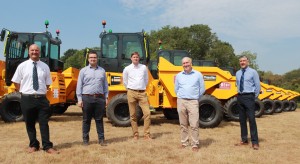