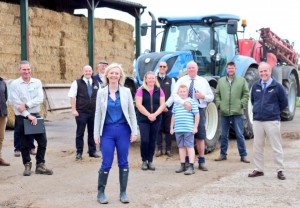 Our Sales Director, Graham Parker and Littleport Branch Manager, James Brown, were honoured to be invited by Ed Lankfer of Laurel Farm, near Downham Market in Norfolk to a farm visit by Liz Truss, MP for South West Norfolk and the Governments Secretary of State for International Trade.

Representatives from the NFU, trade suppliers and local farms were able to each share their concerns with Liz on how Brexit may affect their businesses.

Graham made the point to Liz that there are a huge number of people in East Anglia involved in the supply chain to Agriculture and that farmers ability to be profitable is so important to so many people’s livelihoods.

Tariffs on commodities and the need for a level playing field with Europe and the rest of the World when it comes to issues such as the use of pesticides and animal welfare were also discussed at length.

From all the farms and trades that attended this meeting, the unanimous voice was that farmers must have the Governments ear and be represented.

Liz kindly said she would feed back the concerns raised to her fellow Cabinet Members.

Thank you goes to Ed Lankfer for his hospitality on the day and for giving Graham and Jim the opportunity to have a voice in what is such a complex and game changing subject that is Brexit.