Spread a Bale gets galvanised 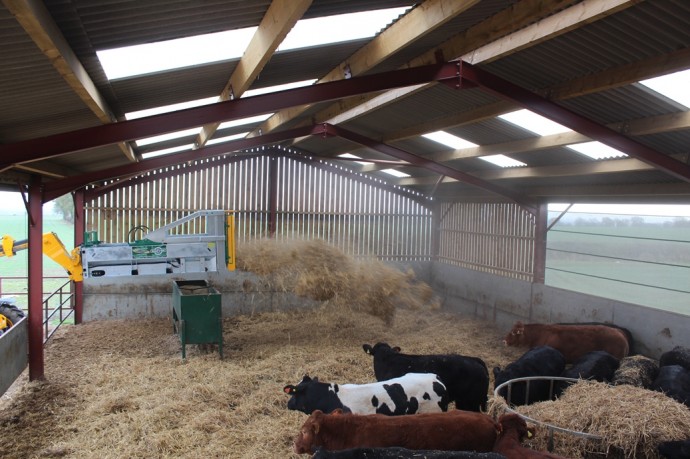 For 2015, Spread-a-Bale machines will feature a galvanised finish. Now why is that I hear you ask. Well the new finish will be harder wearing than conventional paint, and give the machine better protection against the corrosion risks to which the machine is exposed during use. But it doesn’t stop there, the 2015 machines will also have a combination of lighter rotors and improved hydraulics with an up-rated motor that the manufacturers say will improve the machine’s working life and extend the distance it can spread straw.

Spread-a-Bale is a hydraulically powered machine that spreads entire straw evenly while creating minimal dust and without staff having to enter the pen, which reduces the time and labour involved, as well as reducing straw usage. “These changes will increase the efficiency with which the machine spreads bedding straw, while also protecting it against some of the obvious threats that exist on busy livestock farms”, says Tom Robinson, UK Sales Manager.

Spreading efficiency and reach have been improved by using new style rotors that strip straw out of the bale more efficiently. Rotor torque has been raised by some 30% courtesy of larger motors and an improved control system. “These changes mean the machine can cope with round, dense and mouldy bales as efficiently as it always has worked with square bales”, says Tom.

Thos Storey has taken the opportunity to re-model the front end of the machine, these changes improving its performance and strength. Improvements include stronger hydraulic ram supports and re-positioning pivot points. It has also simplified the bottom of the spreading head to improve material flow through the spreading rotors and adjusting the angle of the ramp leading to the belt to improve the speed and ease of bale loading.

A replaceable lip is now fitted to the leading edge of the machine to protect it against damage when picking bales off the ground. The side deflector plates are also now made of durable yellow plastic – similar to that used in mudguards – so neither they nor buildings are damaged by accidental contact during spreading. Users report that the colour helps avoid damage when working in confined or dark spaces.

Taken together, these changes have removed around 100kg from the machine’s overall weight, which opens up the potential to use it with a greater range of smaller loaders and tractors. A new style of rear guard is also being fitted to the bale chamber which – as well as being stronger than its predecessor – offers operators better visibility of the bale chamber.

Thos Storey is also offering a retro-fittable cowling that can quickly be attached/detached from in front of the rotors which enables the machine to windrow hay or silage, or distribute it into feed troughs or mixer wagons. This option costs £450.