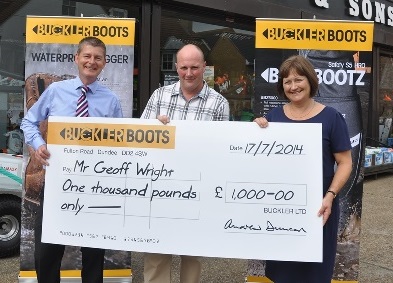 Geoff Wright, farm manager at South Fambridge Farms, Rochford, Essex has won £1000 in a promotion organised by Buckler Boots in conjunction with Ernest Doe & Sons Ltd. The prize draw was part of a larger promotion run in June across all our 19 branches in East Anglia and South East England.

Mr Wright is a regular customer in the Rochford branch of Ernest Doe and only filled in the entry form after being prompted to do so by branch parts manager Bradley Walker. In his own words, Mr Wright “Never expected to win” so he was more than happy when he received a phone call advising him of his success.

Our photo shows Mr Wright, centre, flanked on the left by David Healey, regional and key accounts manager for Buckler Boots, and Marian Harpur, clothing manager for Ernest Doe. David commented “We were extremely pleased with the way the promotion ran and the interest shown by Ernest Doe customers in Buckler Boots and its products which are known to be hard wearing and comfortable in use. Many congratulations are due to Geoff on his win and we would like to thank everyone who took part in this successful Buckler Boots event.”